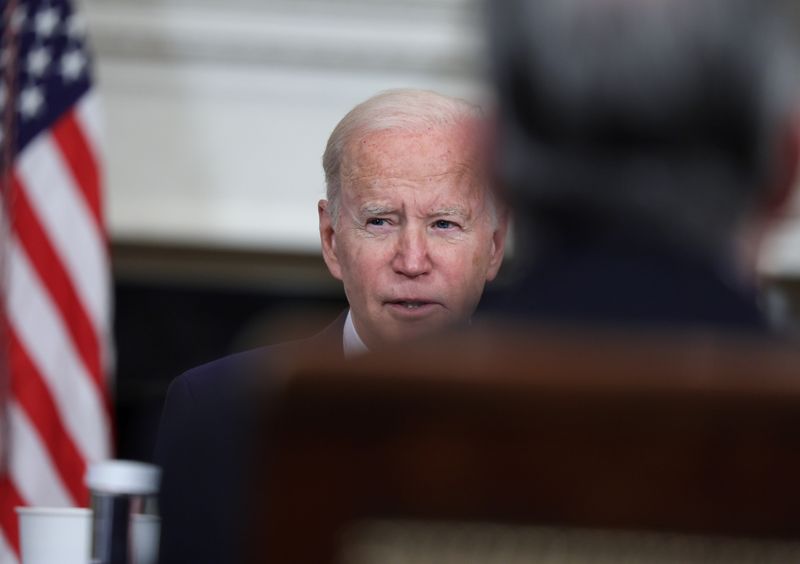 © Reuters. U.S. President Joe Biden speaks as he meets with Inspectors General to discuss oversight, accountability, and transparency, including implementation of his historic Bipartisan Infrastructure Law and American Rescue Plan, in the State Dining Room in the W

WASHINGTON (Reuters) – The White House on Tuesday said it had pushed out $185 billion in funding under a $1 trillion bipartisan infrastructure law passed last year, with that same amount or more to follow in 2023, but denied the funding would fuel inflation.

Tuesday marks one year since President Joe Biden signed the massive spending bill, which will disburse billions of dollars to state and local governments to fix bridges and roads, while expanding broadband internet access to millions of Americans.

National Economic Council Director Brian Deese said the infrastructure, the Inflation Reduction Act and a bipartisan law funding domestic semiconductor production together would generate some $3.5 trillion in investment over the next decade.

Deese said the funding had put the United States into a better position than nearly any other country in the world, laying the ground for private investments and equipping the United States to deal with major global economic challenges.

He rejected concerns raised by some Republicans that the added funding would boost inflation, already running at close to 8%, since investments in the digital economy, transportation and other industrial sectors would improve efficiencies, reduce supply chain pressures and lower costs in the longer term.

Former New Orleans Mayor Mitch Landrieu, who oversees implementation of the law, said the Biden administration had announced nearly 7,000 projects reaching over 4,000 communities across all 50 states, Washington, D.C. and the U.S. territories.

He said the federal government had hired over 3,500 workers to implement the law, which is already funding the repair and replacement of 2,800 bridges and funding procurement of 5,000 new clean transit and school buses.

“But the reality is that we’re just at the beginning,” he said. “Between now and the end of the year, we’re going to kick off even more major projects.”