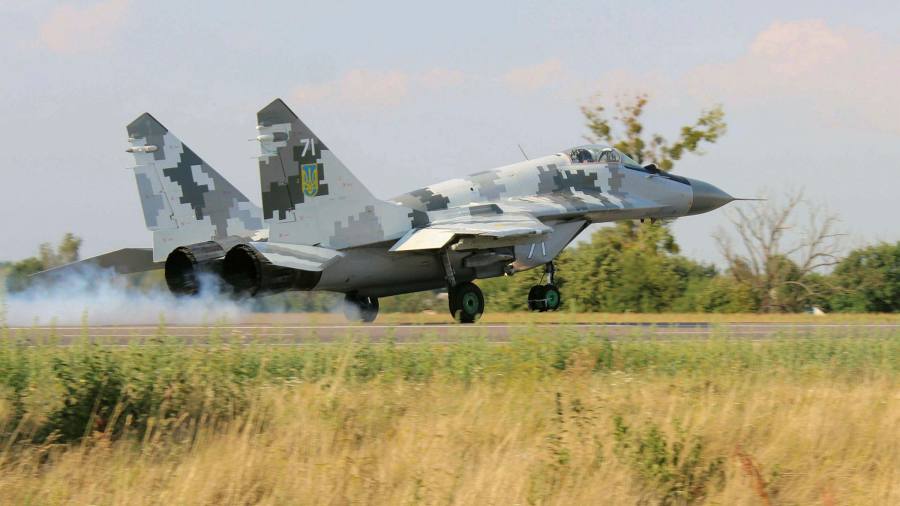 Peace talks with Russian president Vladimir Putin over the invasion of Ukraine are doomed, said Boris Johnson, and it is vital the west continues to supply Kyiv with the weapons it needs to rebuff Moscow’s offensive.

Johnson, talking on a flight to India on Wednesday night to meet its leader Narendra Modi, said: “I think it’s very hard to see how the Ukrainians can negotiate with Putin now, given his manifest lack of good faith . . . How can you negotiate with a crocodile when it has your leg in its jaws.”

Johnson said Zelensky, whom he met in Kyiv last month, is determined to expel Russian forces from their existing positions in the east of the country, but that the Ukrainian leader takes a different view on Crimea: “On Crimea they’re not as maximalist.”

A senior Pentagon official said on Wednesday that a transfer of spare parts facilitated by the US and allied countries has given Ukraine access to an extra 20 warplanes, providing Kyiv’s air forces with much-needed firepower as they try to fend off a renewed Russian onslaught.

“[Ukraine has increased its fleet] by more than 20 . . . because of the work the United States and the international community has done to help get them the parts they need to get them in the air,” the senior US defence official said on Wednesday, adding that the country was in a stronger position than three weeks ago.

The transfer of spare aircraft parts to allow Ukraine to repair and refurbish its jets is the latest instance of a growing openness by the US and its allies to sending heavier weaponry to Ukraine. It comes as Russia begins a renewed assault in the east and south of the country, having failed to conquer Kyiv.

Last week President Joe Biden announced an additional $800mn in lethal aid to Ukraine, including expanding US assistance to include heavy artillery. The US is expected to announce a further $800mn in aid this week.

Zelensky said on Wednesday that western countries had been more willing to send heavier lethal weapons in recent days. “It has become warmer, in terms of weapons. We have warmer relations, the west has a warmer attitude to Ukraine. It has become clearer when we can get that military equipment.”

He added: “I’m not ready to say how many planes are coming. I am of course not ready to mention the details of what we are getting.”

Meanwhile, John Kirby, Pentagon press secretary, said he had misspoken on Tuesday when he said that Ukraine had received “whole aircraft” from another country.

“I had been given to understand that an offer made by another nation in the region to provide whole fixed-wing aircraft to Ukraine . . . had actually been effected. It has not,” he said. Kirby added: “That said, the Ukrainians have received . . . enough spare parts and additional equipment such that they have been able to put in operation more fixed-wing aircraft in their fleet than they had even two to three weeks ago.

“They have been able to increase their fleet by quite a number.”

There have been on-and-off conversations about transferring whole MiG-29 fighter jets to Ukraine, US and European officials said, but doing so presents logistical challenges. Some western defence officials also fear that providing entire planes could escalate the conflict, although others have become less concerned about such an outcome as the war has ground on.

“It’s very complicated to give jets,” a European official said. “We always have to find the right balance between what [Ukraine is] asking for, and also, what will be easy to provide in a very short timeframe and also to weigh correctly what could be too escalatory for Russia.”

The US has also expanded its involvement in the conflict by beginning to train a small group of about 50 Ukrainian forces outside of the country on how to use howitzer artillery systems, the senior US official said. The official declined to specify where the training was taking place.

“This is train the trainers,” the official said. “They will get trained on how to use the howitzers and then they’ll be able to go back into Ukraine and train their colleagues.”