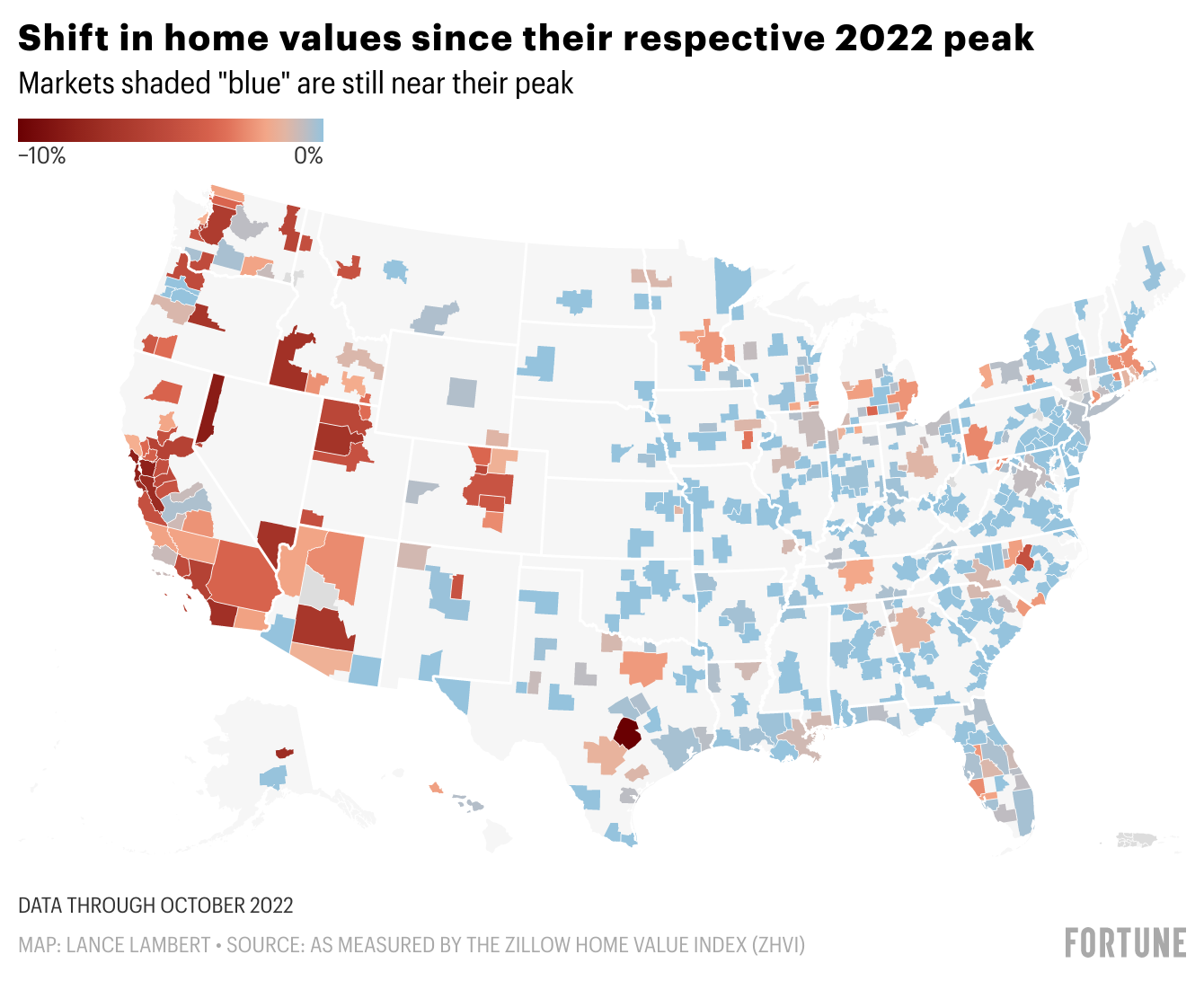 “When the shiitake mushrooms hit the fan, you [investors] want to get out first. The way to do that is to figure out where the lowest sale is, and be 2% below that. And if it doesn’t sell in the first weekend, move it [the price] down [again],” Redfin CEO Glenn Kelman recently told Fortune.

While flippers and homebuilders are scrambling to move inventory in markets like Las Vegas—where home values are down -6.93% since its 2022 peak—that’s not the story (at least yet) in every market. A lot of markets are still sitting at their 2022 peak. Simply put: The “shiitake mushrooms” has yet to hit “the fan” in every market.

Among the country’s 400 biggest housing markets, 219 have seen home values fall off their 2022 peak. The average decline being -2%.

While the home price correction has certainly gone national, it continues to hit two types of markets harder than others.

The first group being “significantly overvalued” housing markets. These are often either second home markets or boomtowns that saw home prices during the boom soar far beyond what local incomes can support.

Look no further than Austin, which Moody’s Analytics deemed in the second quarter as being “overvalued” by 61.1%. That level of froth might explain why Austin has already seen home values fall 10.21% from its 2022 peak. Not too far behind Austin are other “significantly overvalued” markets like Reno (where home values are down -8.47%), Boise (-7.06%), and Salt Lake City (-6.89%).

The second group comprises high-cost markets along the West Coast. Places like San Francisco (where home values are down -8.18%), Santa Cruz (-7.58%), and Seattle (-6.28%). According to John Burns Real Estate Consulting, those markets are hyper mortgage rate sensitive. In many cases, they’re hit by a double whammy: Not only are their high-end real estate markets more rate-sensitive, but so are their tech sectors.

While 219 major markets are down from their 2022 peak price, another 181 markets remain at their 2022 peak price. The ongoing mortgage rate shock has yet to see home values, as measured by Zillow, fall in markets like Philadelphia, Baltimore, Virginia Beach, Oklahoma City, and Richmond.

On one hand, some of these 2022 home price corrections are fairly big. On the other hand, most of these markets are still up big-time since the onset of the Pandemic Housing Boom.