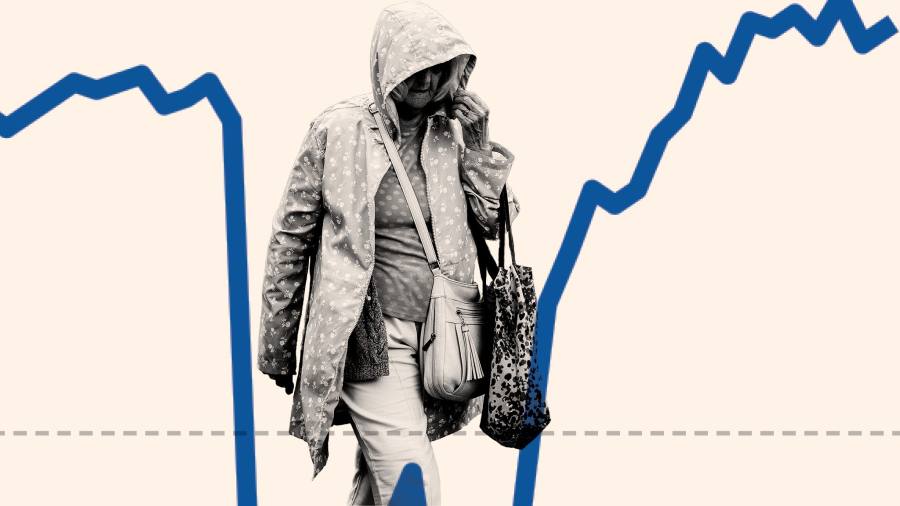 The UK economy stagnated in the three months to July as the cost of living crisis hit household budgets and business activity.

Output was flat over the period, according to official data released on Monday, compared with economic growth of 0.3 per cent in the three months to April.

The latest data from the Office for National Statistics will soon be superseded by new figures that are likely to show a relative decline in UK economic performance compared with other leading economies such as Germany.

In Monday’s data, the growth rate lost momentum as rising costs hit consumers and businesses. UK inflation hit a 40-year high of 10.1 per cent in July, eroding the money people have available to spend on goods and services.

The size of the economy in July was no larger than six months earlier and the monthly rise in gross domestic product of 0.2 per cent fell short of the 0.4 per cent forecast by economists polled by Reuters.

Economists had expected more of a bounce back from the 0.6 per cent fall in GDP recorded in June, which reflected the loss of two working days linked to Queen Elizabeth II’s platinum jubilee celebrations.

“The disappointingly small rebound in real GDP in July suggests that the economy has little momentum and is probably already in recession,” said Paul Dales, economist at Capital Economics.

On a sectoral basis, the GDP data showed services expanding 0.4 per cent and driving growth. But production, including manufacturing, fell 0.3 per cent after a decrease of 0.9 per cent the previous month. Construction also registered two consecutive sharp contractions.

Some analysts believe a freeze in average annual household energy bills at £2,500 over the next two years, announced last week by new prime minister Liz Truss, will help support demand in the economy during the coming months.

James Smith, economist at ING, said the package of measures did not guarantee the economy would avoid sliding into a recession, but “should help limit the depth of any downturn over winter”.

However, with many households and businesses struggling to keep up with energy payments, the economic outlook remains downbeat.

“Households still face a further decline in their real incomes during the second half of this year,” said Martin Beck, economic adviser at the EY Item Club. “As things stand, the economy is unlikely to do more than stagnate over the coming year.”

Economists expect the Bank of England to raise interest rates for the seventh consecutive time at its Monetary Policy Committee’s next meeting on September 22.

Higher borrowing costs are likely to cause a further slowdown in household demand, with consumer confidence in August having dropped to the lowest level since records began almost 50 years ago.

By the end of this month, however, economists and policymakers will have to contend with heavily revised GDP figures, which are likely to show a slower recovery from the Covid-19 pandemic than the current set of numbers.

In May, UK economic performance since the start of the pandemic appeared to be significantly better than that of Germany, where output was hit by semiconductor shortages and a slower recovery in the service sector.

But revisions to both countries’ data since then have reversed the story. The ONS has published new estimates for GDP up to the end of 2020, which show the level of UK output 2.5 per cent lower at the end of the period than the current set of figures.

This information is not yet incorporated into the published data, but suggests the UK economy has not yet reached the peak level of output recorded before the pandemic.

It was the discovery of large costs for the Covid test and trace programme, personal protective equipment and coronavirus vaccines in the health sector that largely led statisticians to downgrade UK output for 2020.

German data, by contrast, has seen upward revisions over the past three months so the country’s economic performance has now reached the pre-pandemic peak and appears better than Britain’s. By the end of September, the ONS will publish new figures for 2021 and 2022 on a similar basis to the changes it has announced for earlier years and these are likely to show an improvement from the current vintage.

The ONS has indicated that as the costs of the pandemic fall away, the health sector is likely to register faster growth rates, although the statistical agency has not said how large these will be.

But the UK’s economic performance relative to Germany could still look worse than it previously did.

The latest UK GDP data are still being published without including any of these ONS revisions.