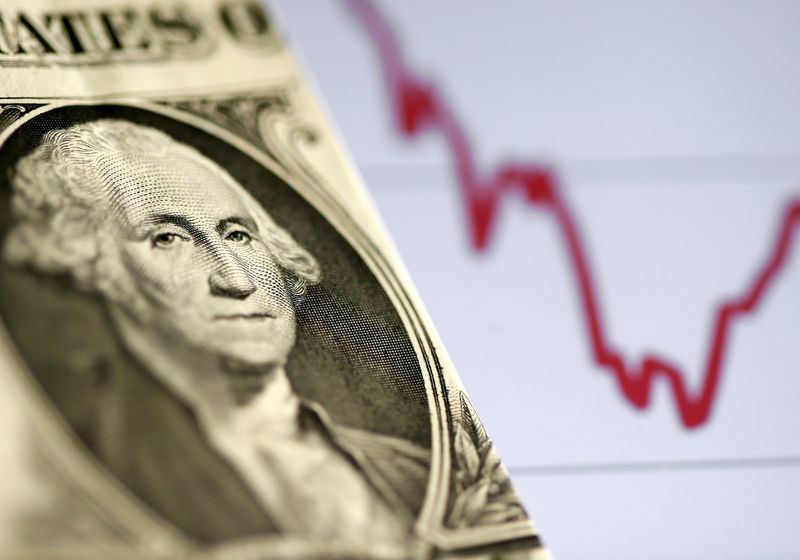 © Reuters. FILE PHOTO: A U.S. dollar note is seen in front of a stock graph in this November 7, 2016 picture illustration. REUTERS/Dado Ruvic/Illustration

NEW YORK (Reuters) -U.S. Treasury yields surged and a recession warning – the yield curve inversion – widened on Tuesday after monthly U.S consumer prices unexpectedly rose in August, signaling to the market that the Federal Reserve will crack down further on inflation.

The yield on two-year Treasury notes, which typically reflects interest rate expectations, spiked to an almost 15-year high of 3.794%. The jump significantly widened the yield curve gap with the benchmark 10-year Treasury note.

Market rates were declining before the consumer price report on expectations headline inflation had peaked and that even though the Fed was expected to hike rates another 75 basis points next week, policymakers would soon pull back.

The consumer price index rose 0.1% last month after being unchanged in July, while the CPI edged up 8.3% in the 12 months through August. Economists polled by Reuters had forecast the monthly CPI dipping 0.1% and year-over-year rising 8.1%.

“Inflation is public enemy No. 1 for the Fed, and I think this number puts pressure on them to continue,” said Priya Misra, head of global rates strategy at TD Securities.

“We get a fairly hawkish message out of that September Fed meeting, and that’s what the market is pricing in if you look at today’s massive move higher in rates,” Misra said.

The Fed’s terminal rate could rise to the mid-4% range before rates start declining, she said. The market before Tuesday had expected that rate to top around 3.75% if not lower.

Nomura said in a note it expects a terminal rate of 4.50% to 4.75% by February due to “inflation that is persistently elevated for longer” and the Fed to hike rates by 100 basis points (bps) next week.

As the day progressed, the odds of a 100 bps hike increased. Fed fund futures priced in a 35% chance that the Fed will raise rates by 100 bps at the end of its two-day meeting Sept. 20-21.

Misra doubted the Fed would go that high, but said 75 bps in November was possible.

“It really comes down to how sticky inflation remains,” said Mauricio Agudelo, senior fixed income portfolio manager at Homestead Funds Advisers. “It’s a battle that the Fed will continue to fight and they will have to continue pressing, unfortunately at the risk of breaking something.”

“The only meaningful deflationary piece was gasoline,” Hughey said about the CPI report. “So you really had broad inflationary pressures continuing to a more significant degree than what the market is expecting,” he said.

“The curve can be even more inverted, because the front end keeps moving higher due to inflation,” Misra said. “But the economy’s ability to handle the rate hikes, we haven’t become more resilient on that front.”

The Treasury’s auction of $18 billion in 30-year bonds was “quite strong,” Lou Brien, market strategist at DRW Trading, said in a note. The yield at 3.511% was almost two full basis points less than market bidding at the sale’s deadline, he said.

The breakeven rate on five-year U.S. Treasury Inflation-Protected Securities (TIPS) was last at 2.635%.

The 10-year TIPS breakeven rate was last at 2.447%, indicating the market sees inflation averaging about 2.5%% a year for the next decade.

The U.S. dollar 5 years forward inflation-linked swap, seen by some as a better gauge of inflation expectations due to possible distortions caused by the Fed’s quantitative easing, was last at 2.446%.