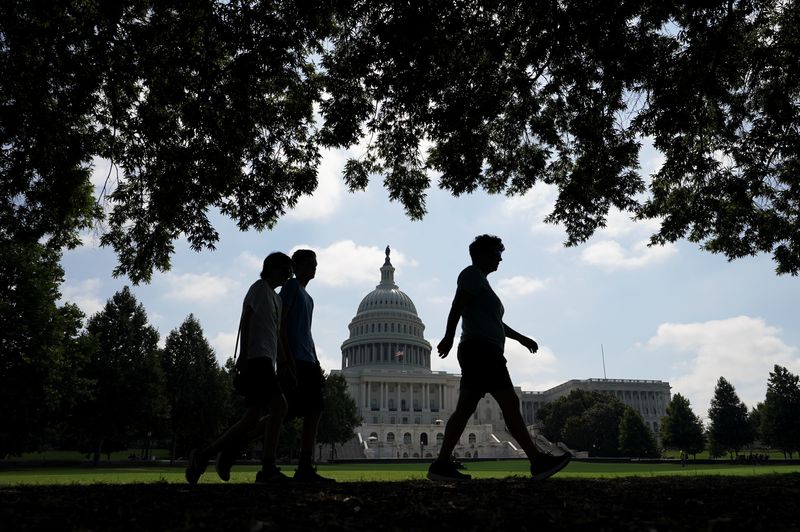 © Reuters. FILE PHOTO: Visitors walk the grounds of the U.S. Capitol, days after the removal of security fencing which was placed around the complex after the January 6th attack, in Washington, U.S., July 12, 2021. REUTERS/Kevin Lamarque

By Kanishka Singh and David Shepardson

WASHINGTON (Reuters) -A security scare at the U.S. Capitol on Wednesday prompted evacuation of Congress after a small airplane from the U.S. Army’s Golden Knights parachute demonstration team flew over a baseball game, police said.

House speaker Nancy Pelosi called the alarm an “outrageous and frightening mistake” by the Federal Aviation Administration (FAA) for its failure to alert Capitol Police to the pre-planned performance over the Washington Nationals baseball stadium.

She said Congress would examine the results of a review into the incident to determine what went wrong.

The U.S. Capitol Police first said they were tracking an aircraft that posed a “probable threat” to the Capitol complex, and then minutes later said there was no threat and that the building had been evacuated out of an abundance of caution.

Police later said the plane was a military aircraft carrying members of the U.S. Army’s Golden Knights parachute demonstration team. The FAA did not notify police in advance about the approved military flight for military appreciation night at Nationals Stadium, Capitol police told congressional staff in a letter.

The FAA said late Wednesday it would “conduct a thorough and expeditious review of the events this evening and share updates. We know our actions affect others, especially in our nation’s capital region, and we must communicate early and often with our law enforcement partners.”

The FAA statement did not say whether the agency had alerted Capitol Police to the flight, which took off from Joint Base Andrews in Maryland.

The Golden Knights parachuted into the Washington Nationals’ baseball stadium, Nationals Park, a little over a mile away from the U.S. Capitol, before returning to the Maryland base.

“The unnecessary panic caused by this apparent negligence was particularly harmful for members, staff and institutional workers still grappling with the trauma of the attack on their workplace on January 6th,” Pelosi said in a statement late on Wednesday, referring to the attack on the Capitol on Jan. 6, 2021.

“Congress looks forward to reviewing the results of a thorough after-action review that determines what precisely went wrong today and who at the Federal Aviation Administration will be held accountable for this outrageous and frightening mistake,” Pelosi said.

Capitol Police said in the email to some congressional staff that it “will be working with our airspace partners to address the notification issues.”