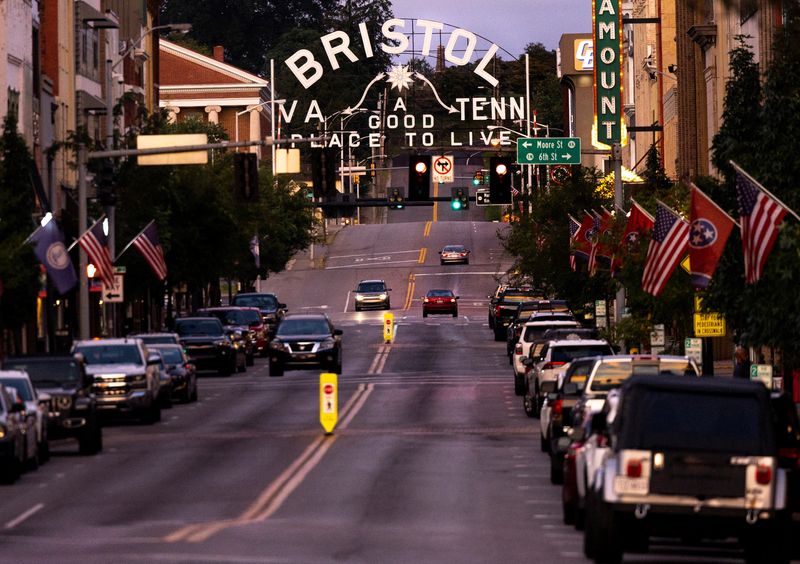 © Reuters. A view along State Street in downtown Bristol where one half of the street is in Bristol, Virginia and the other in Bristol, Tennessee, U.S., August 30, 2022. When the U.S. Supreme Court overturned Roe v. Wade ending the nationwide right to terminate a pr

BRISTOL, Va. (Reuters) – The women’s health clinic in Bristol, Tennessee, had a seemingly simple solution to continue providing abortions after its home state banned the procedure this summer: It moved a mile up the road to Bristol, Virginia, where abortion remained legal.

But relocating between the twin cities brought a host of challenges.

Bristol Women’s Health has faced logistical hurdles, legal concerns and local opposition since opening in late July across the state line, which runs through the cities’ shared main street. Its experience encapsulates the complicated new reality of abortion in America after the U.S. Supreme Court in June overturned the 1973 Roe v. Wade case, ending the nationwide right to terminate a pregnancy.

Abortion laws now vary dramatically from one state to another, leaving many communities without any access to the procedure. That’s the case in Tennessee, one of about a dozen Republican-led states that enforced near-total bans on abortion after the court’s ruling.

No other clinic offered abortion services within 80 miles (130 km) of Bristol, an Appalachian mountain community known for its country music legacy. Diane Derzis, who owns the new facility, viewed the neighboring state as the logical place to move.

Abortion is still allowed in Virginia through the second trimester and into the third in limited circumstances. In a recent poll https://wilder.vcu.edu/news-and-events/news-articles/commonwealth-poll-virginians-disapprove-of-president-biden-but-satisfied-with-status-of-virginias-abortion-laws-.html of state residents, half said they believed the state’s abortion laws were reasonable and should not be altered.

But many in Bristol, Virginia, where Republican Donald Trump won 68% of the vote in the 2020 presidential election, were unhappy to see an abortion clinic come to the city of about 17,000 people.

Some residents said they oppose abortion. More said they don’t want the din of anti-abortion protesters in their neighborhood, which is home to elderly residents and families with young children.

Chris Harber, whose yard is adjacent to the clinic’s driveway, said protesters had once lined the road leading to the clinic with large, graphic posters that he did not want his 8-year-old son to see.

“One of them said ‘child baby sacrifice center’ and had an arrow pointing there,” Harber, 34, said in an interview on his porch. “When he sees that he’s going to ask me, ‘what do they mean?’ I don’t want to have to explain that to him.”

Several others who live near the clinic said it had not been disruptive.

“It doesn’t bother me a bit,” said Ronnie Scott, 81, noting he disagrees with abortion but doesn’t like the government weighing in.

Erika Schanzenbach leads the anti-abortion group “LifeBristol” and protested outside the Tennessee clinic for years.

She said when she learned of its move to Virginia, her group distributed hundreds of flyers around the new clinic’s neighborhood.

“What can you do to STOP this? Contact your city officials and tell them you do not want this in your city!” the flyers read.

Anthony Farnum, mayor of Bristol, Virginia, soon received dozens of calls, texts and emails from residents asking him to close the clinic. But the mayor explained he had no power to do so as long as Virginia permits abortion.

“I told folks it’s probably best to reach out to our state leaders,” he said.

Governor Glenn Youngkin, a Republican elected in 2021, has said he supports banning abortion after 15 weeks of pregnancy. The state might further restrict abortion if Republicans win the majority in the state Senate in next year’s elections and the party retakes full control of the legislature.

“That’s certainly a concern,” said Derzis, who also owns a clinic in Richmond, Virginia. “The hope is that women can speak for themselves on Election Day.”

Democrats across the country have seized on the threat to legal abortion to energize voters in this November’s midterm elections, warning that electing Republicans could lead to more state restrictions and possibly a national ban.

Barry Staubus, the district attorney whose office oversees Bristol, Tennessee, said abortion providers could face legal trouble if they offer the two-part abortion pill regimen to a patient at the Virginia clinic and the patient takes the second pill back at home in Tennessee.

“That could potentially be the kind of situation that would require some litigation to determine whether or not there had been a violation of law,” Staubus said. “I hope that physicians are wise enough to avoid that and it doesn’t come up, but it may very well.”

The doctor who performed abortions at the Tennessee clinic is not currently doing so in Virginia due to the possible legal risks, Derzis said. He still provides other gynecological services in Tennessee, she said. Reuters could not reach him for comment.

Derzis, who previously owned the Mississippi clinic at the center of the Supreme Court case that led to Roe v. Wade’s overturn, said the clinic hired other doctors who are traveling from outside Bristol to provide abortions.

Stephanie Rosenwinge is part of a small staff that rushed to get the new clinic up and running in a matter of weeks. A sexual assault survivor, she escorted patients into the Tennessee clinic as a volunteer and now works part time answering phones at its Virginia location.

Despite the obstacles, she said she was grateful for the chance to help preserve abortion access in a place where her family has deep roots.