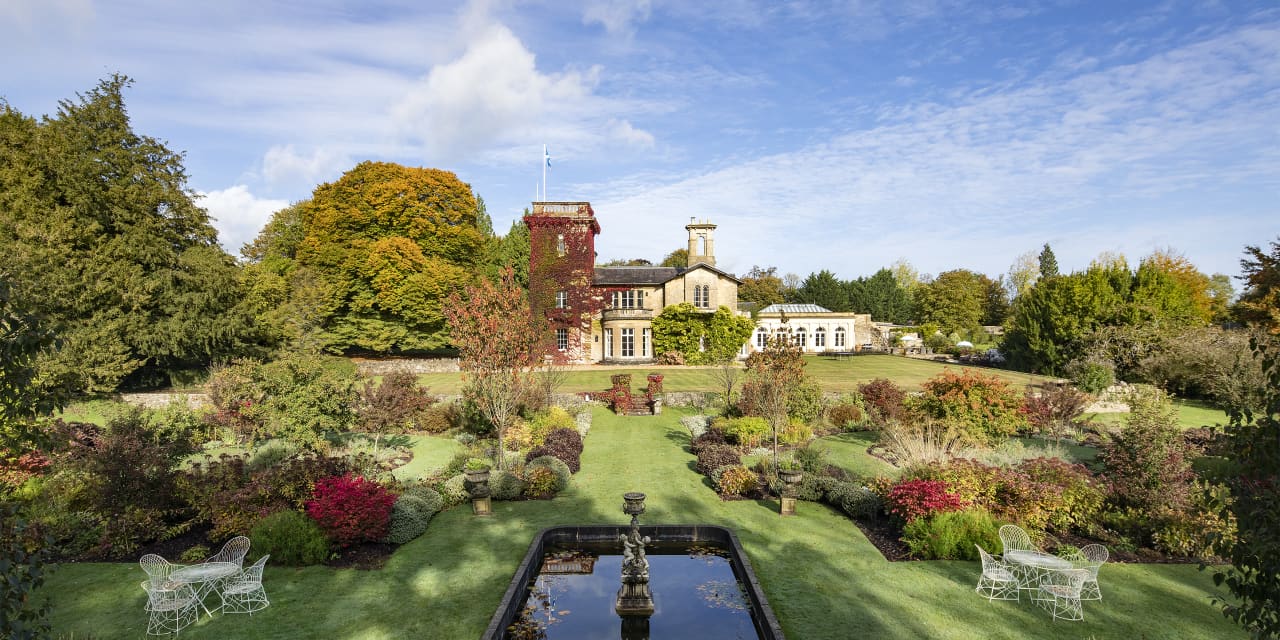 A historic estate in the village of Mells in Somerset, England, came on the market late last month asking £8 million (US$9.74 million).

Known as Wadbury House, the more than 10,000-square-foot main residence was built in 1840 by renowned Victorian architect James Wilson, according to marketing materials from George Nares and Luke Brady of Savills, who represent the listing.

More: English Estate Featured as the Bennet Family Home in ‘Pride and Prejudice’ Lists for £6 Million

Built of Bath stone, the stately eight-bedroom house is entered through a foyer with high ceilings, columns and a sweeping staircase, listing photos show. The home boasts six reception rooms as well as a large formal dining room with a fireplace and floor-to-ceiling windows with extensive views of the property’s grounds.

A primary bedroom suite features a fireplace  and a sunny bathroom with dual sinks, built-in shelving and a soaking tub, plus French doors opening onto a private balcony, according to listing photos.

The home includes more modern amenities as well, including a wine cellar, gym and in-ground backyard swimming pool and patio. The property’s sellers, wellness-focused author and entrepreneur Katie Brindle and her husband, Richard Brindle, have overseen significant renovations with the help of architect Simon Morray-Jones, also known for his work on the restoration of nearby private members club Babington House, according to marketing materials.

More: English Estate Tied to Earl Who’s Rumored to Be the ‘Real’ Shakespeare Lists for £7 Million

“Wadbury has been much more than a home for me,” Ms. Brindle said in a statement. “It has been the setting for the formative years of all my children and my business.” Over the course of an 18-month renovation, the couple has paid close attention to period details in the home including fireplaces, wide oak floorboards, original style radiators and original shutters on the floor-to-ceiling windows, per the listing.

Wadbury House is so named because it was built within the fortification of “an ancient promontory fort called Wadbury Camp” from pre-Roman times, according to marketing materials, and the ruins of old iron works are located on the southern boundary of the property’s 37 acres.

“I can’t think of a better opportunity to live in a grand country house in the most desirable part of Somerset, if not the entire South West,” Mr. Nares said in a statement. “Not only do you have a beautifully renovated and architecturally important estate, but with the ever fashionable Bath close by, along with renowned Babington House on the doorstep, you have amenities that are second to none.”

In addition to the primary residence, the property boasts multiple outbuildings, including two cottages for guests or staff, a new orangery extension to the main house, a converted coach house, stables and an “agricultural barn.”

The extensive grounds also include a tennis court, formal gardens, “parkland and woodland,” a courtyard and full views of nearby historic property Westbury House, per the listing. Information on the property’s most recent sale price was not available.