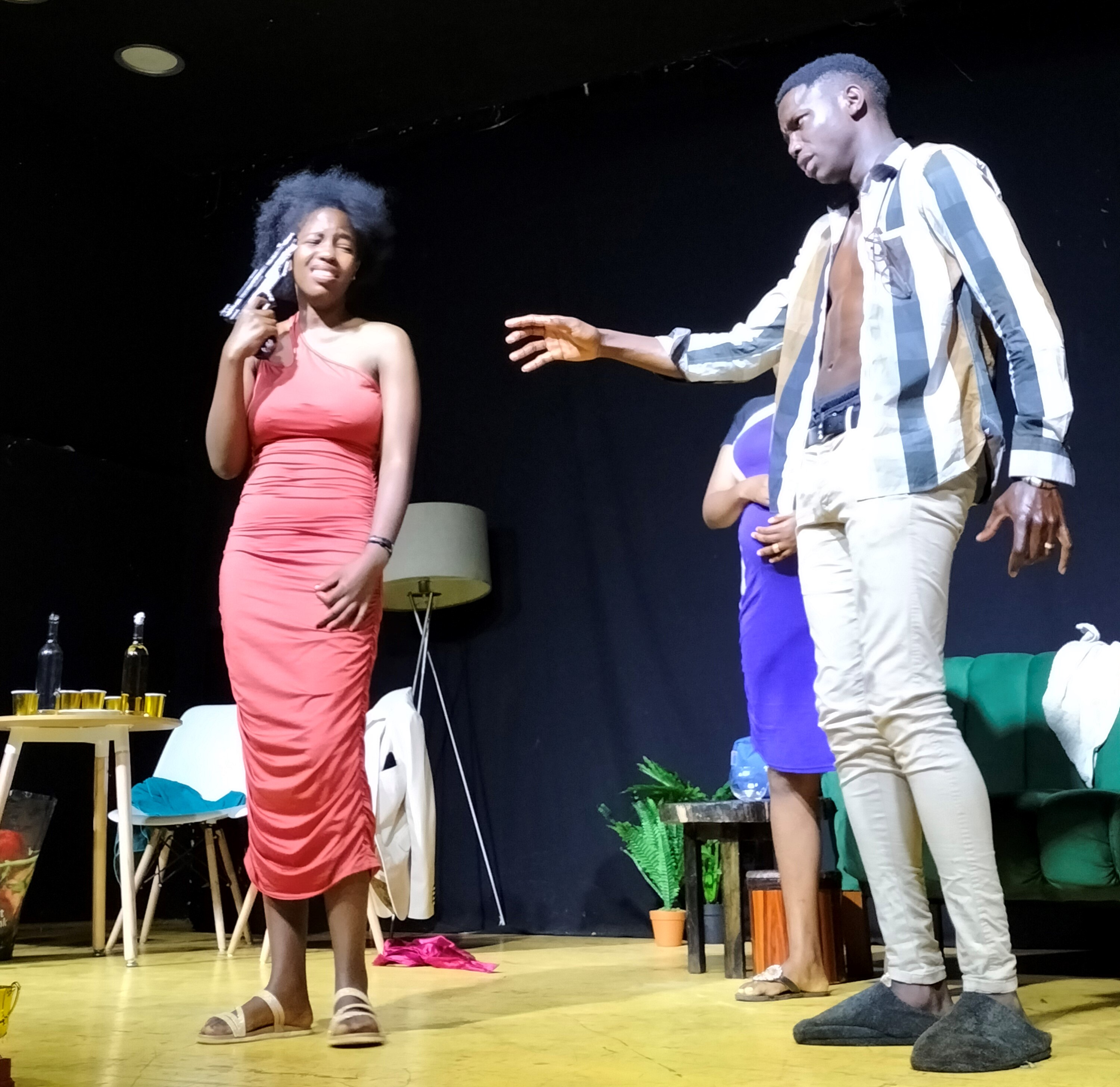 First-time playwright Christine Yohannes took an original approach to her production which was staged this past weekend at the Kenya Cultural Centre.

Ironically entitled ‘Total Disaster’, the show is all about a classic story that is unfortunately universal. It’s about a young woman who has been betrayed by a Casanova whose specialty is cheating every beautiful woman he can find.

He first seduces her with sweet assurances of her being his only one, after which he dumps her. In this case, Majida (Sheila Kariuki) has been impregnated by Alandre (Ephantus Kuria) and at eight months, she is close to having the child.

But Majida has no thought for what will become of the child if its mother goes to jail for life. She is only intent on bumping off Alandre for having ruined her life.

She is out for revenge, and it’s apparent that she believes she will ‘reclaim her power’ after having lost it due to the duplicity and dishonesty of Alandre.

The story is spiced up by the inclusion first of Alandre’s former financee Clare (Jean Gloria) who takes her time trying to convince Majida she would be making a huge mistake by killing the guy.

The other woman who plays her part in actually amping up Majida’s desire to finish the guy is Mila (Faith Wambui).

She is Alandre’s current girl friend who seems well aware of her boyfriend’s cruel technique of collecting women for sexual partnership only to dump them once they make demands, like be faithful, honest, responsible, and caring. Mila apparently knows he is a Cassanova, but doesn’t mind playing with his fire.

I don’t have a problem with the central theme of the play or with the acting or the directing. What I couldn’t understand was the role of the narrator.

I was told it should be seen as an innovative and new approach to theatre, that it’s a new style of performance. But I still have questions.

This technique entailed the narrator (Peace Khamuli, Sharon Gathigia) sitting at the front of the stage with script in hand and reading all the playwright’s explanatory notes which are normally read, digested by the cast, and dramatized without need for anyone sharing those notes with the audience, especially simultaneously with the performance.

My first question is: Wasn’t this approach, of the acting being echoed by the reading, redundant?

I wonder if anyone was as confused by this technique as I was? I mean narrators have a role to play, for instance, when there is a need to introduce a story, play, film, or drama of some sort.

But that type of narrator usually speaks before the story, and steps back for the cast to dramatize the work by themselves.

I initially wondered whether I wasn’t watching the rehearsal of a play, as in ‘a play within a play’? No, that wasn’t the idea.

I wonder if it was to ensure that we the audience knew what was going on. For instance, if you don’t speak Chinese, but you like to watch Chinese movies, you are happy to have sub-titles.

Otherwise, if the actors can tell the story with their body language, one may feel there is no need for sub-titles; and so they get in the way of one’s full enjoyment of the action movie.

Perhaps the playwright felt the actors wouldn’t be able to convey the full development of her characters. Perhaps she felt the audience would be lost without having the full text of the play disclosed to them.

Perhaps it was meant to be a courtesy so we would understand the depth of her characters’ feelings.

Especially Majida’s who was so angry about Alandre’s getting off scot-free after having ruined her life that she was prepared to sacrifice her own.

In the end, we might assume that ‘Total Disaster’ ends as a cliff-hanger since the lights go out, and then three gunshots go off. Yet we can be pretty assured that Majida shot the guy in the end.

What is peculiar is that at that point, the narrator should have been speaking, and telling us what the playwright really intended to have happen in those last few moments.

Instead, I believe the narrator was silent. When we might have needed her most to clarify what actually happened to Alandre and whether the writer wanted us to feel that Majida had ‘reclaimed her power’ by destroying his.

Either way, we must congratulate Christine for her courage to try something new.