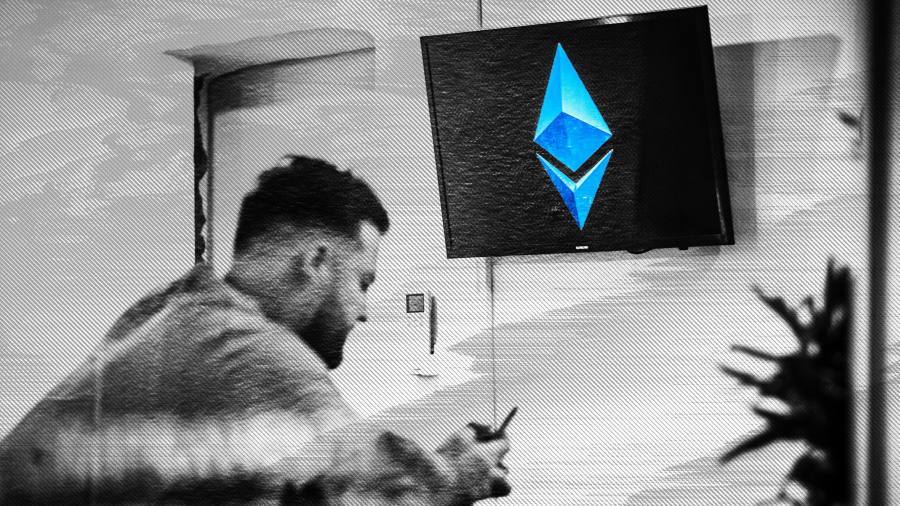 The looming switch of the Ethereum blockchain to a new, greener system has sparked a frenzy of trading by hedge funds racing to place bets ahead of one of the biggest events in the short history of cryptocurrencies.

Traders have been scooping up options on ether tokens — the flagship crypto coin trading on Ethereum — betting on price volatility or protecting themselves against sudden sharp moves ahead of the “Merge”.

The Merge has been a long-awaited event in the crypto industry and will change how new transactions are verified on the Ethereum blockchain.

A clutch of traders are wagering the switch to a new system will slash the network’s energy consumption by as much as 99 per cent, opening up ether tokens to mainstream investors who have until now been wary of a network with an energy usage roughly equivalent to that of Finland.

“This has been one of the most crowded trades in crypto history,” said James West, chief executive of Globe Exchange, a crypto derivatives exchange.

Many of the trades have been placed in the options market, where West said “a lot of smart money [is] buying”, with many expecting that a successful switch will push ether prices higher.

The total number of outstanding option contracts on exchange Deribit, which accounts for 97 per cent of ether options open interest on exchanges, has risen from 1.2mn at the start of the year to more than 4.6mn by Wednesday.

Around 80 per cent of these contracts are call options — a bet on a higher price in which an investor has the ability to buy ether at a fixed price for a set period of time — while the remainder are puts, or bets on lower prices. It’s a sign of “massive bullish sentiment”, according to Deribit chief commercial officer Luuk Strijers.

Some even believe the Merge could help ether supplant bitcoin as the world’s biggest cryptocurrency. The total value of bitcoin in circulation is $390bn, compared with less than $200bn for ether, according to the FT Wilshire Digital Assets Dashboard.

“The mere anticipation of ether overtaking bitcoin” could become “self-fulfilling and unstoppable”, said Anders Kvamme Jensen, co-fund manager of the AKJ Digital Assets fund, who said funds he invests in are betting on the Merge using options.

Some investors have, meanwhile, been constructing options trades to try and profit from potentially huge price volatility from the Merge, regardless of whether that price move is up or down, according to Strijers.

But such has been the industry hype around the Merge, other traders had set up strategies that bet the price of ether would rise sharply before the event but then sell off if the Merge happened.

As a result, some bought shorter-term call options paying out if ether hit $2,500 and funded that by selling longer-dated calls paying out at $3,000, according to Ed Hindi, chief investment officer at hedge fund Tyr Capital, who acts as a market maker in crypto options.

However, that trade has so far not played out as expected. While the price of ether has rallied from less than $1,000 in June to $1,600 this week, that is still some way short of where the shorter-term options would pay out. Fearing they could now be hit if ether rises sharply after the Merge and trigger the options they sold, traders have been racing to cover their positions, according to Hindi.

The market has been “way too bullish” ahead of the Merge, and “way too bearish beyond the Merge”, he said.

Many investors already holding ether have tried to protect themselves from a sell-off if the Merge does not pan out, for instance if it is delayed or there are technical problems, by also using futures contracts to bet that its price will decline. This type of trade, known as shorting, effectively protects them from price movements.

According to Kaiko Research, the so-called funding rate, a measure of the direction of traders’ collective futures positions, in ether is at its lowest level in more than a year, averaging minus 0.6 per cent. That usually signals that investors are focused on going short.

Traders are also hoping that this bet of holding ether while shorting the futures could allow them to pick up some extra tokens, while protecting them from market volatility. Investors who hold ether when the Merge occurs are entitled to tokens that are still based on the older transaction processing system, known as proof of work.

While the Merge is set to move Ethereum to the more energy-efficient proof of stake model, some market participants who oppose the change will continue operating on the old system — something known as a “fork” — meaning those coins may hold some of their value.

Jay Janer, founding partner of KPTL Arbitrage Management in the Cayman Islands, is running this trade because he believes trading the options has become too expensive. “If the fork occurs, we would get the proof of work token for free,” he said.