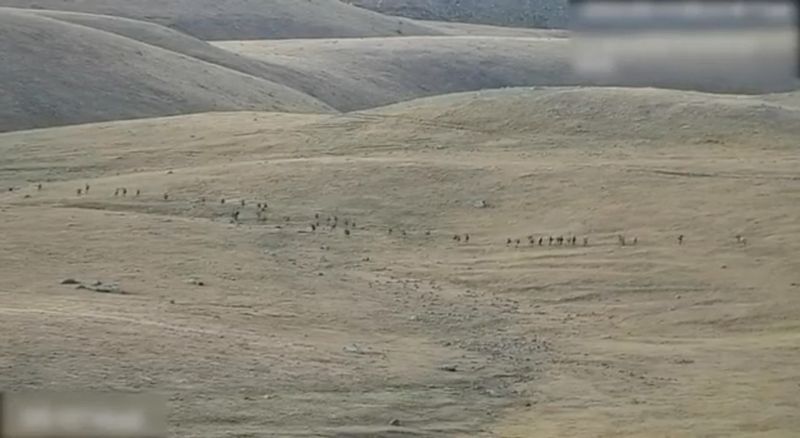 © Reuters. A still image from video, released by the Armenian Defence Ministry, shows what it said to be Azerbaijani service members moving along an unidentified mountainous border area with Armenia, in this still image taken from handout footage released September

TBILISI (Reuters) -Fresh clashes erupted between Azerbaijan and Armenia on Wednesday, a day after nearly 100 soldiers were killed in the deadliest fighting between the ex-Soviet republics since 2020.

At least 49 Armenian and 50 Azerbaijani military were killed on Tuesday in the clashes, with both Yerevan and Baku blaming each other for the fighting which prompted an appeal for calm from Russian President Vladimir Putin.

The clashes have raised fears of another major armed conflict in the former Soviet Union while Russia’s military is tied up with the invasion of Ukraine.

A full-fledged conflict between Armenia and Azerbaijan would risk dragging in powers such as Russia and Turkey, and destabilise an important corridor for pipelines carrying oil and gas just as confrontation over Ukraine disrupts energy supplies.

The Armenian defence ministry on Wednesday accused Azerbaijan, which is backed politically and militarily by Turkey, of firing artillery, mortar and small arms in a fresh attack.

“The situation on the Armenian-Azerbaijani border remained tense,” it added, restating Armenia’s position that Azerbaijan launched attacks on its sovereign territory.

Azerbaijan accused Armenia, which is in a military alliance with Moscow and home to a Russian military base, of firing mortars and artillery against its military units.

“Our positions are periodically being fired against at the moment,” Azerbaijan’s defence ministry said. “Our units are taking the necessary response measures.”

Reuters was unable to immediately verify battlefield accounts from either side.

(Reporting in Nailia Bagirova in Baku, Gabrielle Tétrault-Farber in Tbilisi and Lidia Kelly in Melbourne; Editing by Guy Faulconbridge)