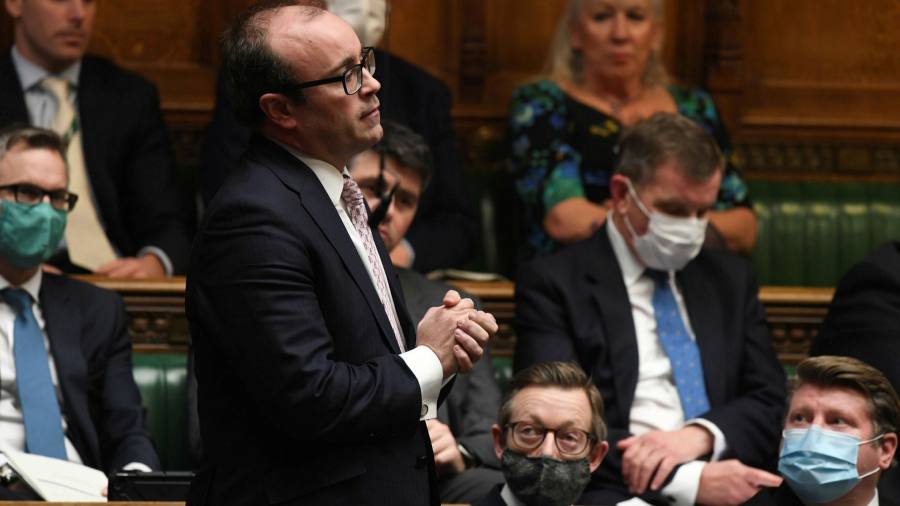 Boris Johnson told Conservative MPs on Friday they would have a “direct line” to Downing Street as he attempted to shore up backbench support following the departure of another senior aide.

The UK prime minister’s chaotic week, following the departure of five senior officials and criticism from cabinet ministers, was capped off with another letter of no confidence in his position submitted by Aaron Bell, a 2019 intake Tory.

Bell said he objected to the so-called ‘partygate’ scandal around Downing Street parties that broke coronavirus restrictions. “The breach of trust that the events in No 10 Downing Street represent, and the manner in which they have been handled, makes his position untenable,” he wrote.

Johnson was trying to build a new team on Friday, following the surprise departure of Munira Mirza, head of the Number 10 policy unit and one of his longest standing and closest aides, over a remark he made in parliament about Labour leader Sir Keir Starmer and notorious paedophile Jimmy Savile.

Mirza’s exit was followed by the resignation of Dan Rosenfield, chief of staff, director of communications Jack Doyle, principal private secretary Martin Reynolds and Elena Narozanski, another member of the policy unit.

Sajid Javid, health secretary, joined chancellor Rishi Sunak in distancing himself from Johnson over the Savile remark. He told reporters on Friday, “the prime minister has already clarified his remarks . . . I think that was important”.

In an effort to restore his authority, Johnsons said in a letter to the Conservative parliamentary party that he was “committed” to reforming No 10 and promised MPs would have a greater role in policymaking. He added that the appointment of MP Andrew Griffith as the new director of policy would provide “whatever engagement and support is necessary”.

“I understand the deep importance of engaging with colleagues in parliament and listening to your views and that is why I want colleagues to have a direct line into 10 Downing Street,” he wrote.

Michael Gove, levelling up secretary, told the Financial Times he was “absolutely 100 per cent confident” that Johnson would still be prime minister in a week’s time.

Gove admitted “mistakes were made” by senior Downing Street staff who have departed. “I think it’s only fair to say that people who are leaving are people who worked incredibly hard . . . but mistakes were made and changes need to be made. We’re seeing those changes coming through.”

Within the Conservative party opinion was divided on whether the Downing Street clear out was a necessary government reset or a moment of peril for the prime minister.

A prominent MP from the 2019 intake said: “We’ve been asking for a clear out . . . I don’t buy the ‘resignations’ line [of advisers], so would liken it more to a football manager leaving a club by ‘mutual consent’.”

One influential member of the government, however, said Mirza’s departure suggested trust in Johnson had collapsed. “I really think this is it now. Boris has lost control of events and I would say it is odds on that we reach enough letters for a confidence vote next week.”

Eight MPs have publicly declared they have submitted letters of no confidence in the prime minister. Senior backbenchers estimate the actual number to be in the region of 30 but only Sir Graham Brady, chair of the 1922 committee of backbench MPs, has knowledge of how many have been submitted. A threshold of 54 letters are needed to trigger a no-confidence vote.

One Johnson loyalist said there was a “safety mechanism” that would alert the prime minister when this number was nearly reached. “Five or 10 of the letters are submitted by loyalists. When Brady hits the magic number, he calls around everyone to ask if they wish to withdraw. At that point, we know we’re in trouble.”

The MP added that a similar method was used by MPs attempting to protect former prime minister Theresa May when she faced a no-confidence vote in 2018. “That’s why the Brexiters thought they had enough letters to topple her, and it suddenly appeared they didn’t.”