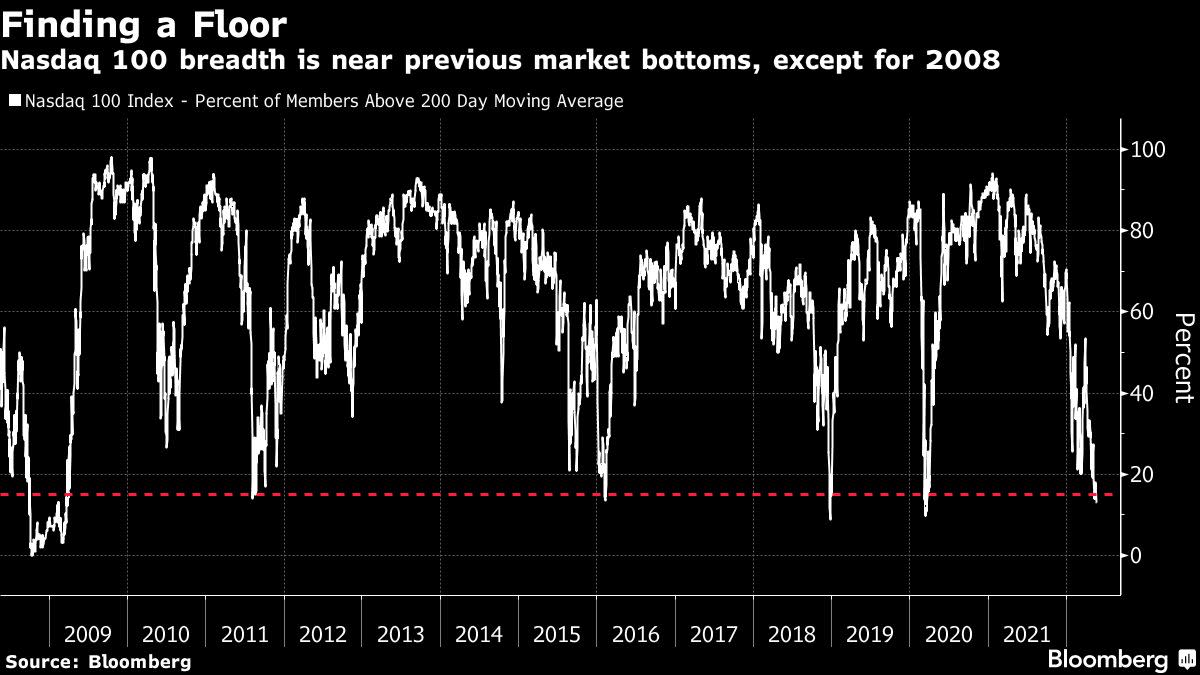 (Bloomberg) — Calling the bottom in the tech-sector meltdown isn’t easy, even after a $5.5 trillion wipe-out, yet there are some signals giving investors hope.

The price charts paint a dire picture: The tech-heavy Nasdaq 100 Index just capped its seventh straight week of declines, the longest such streak since 2011, and has shed nearly 30% from its peak last year. The U.S. trillion-dollar quartet of Apple, Microsoft Corp., Amazon.com Inc. and Alphabet Inc. has led the charge lower in the latest leg of this selloff.

Yet a number of investors are starting to see a light at the end of the tunnel. The Nasdaq 100 now trades for about 20 times its estimated forward earnings — in-line with long-term averages — as frothy valuations built up during the pandemic recede. The Philadelphia Semiconductor Index, home to chipmakers including Intel Corp. and ASML Holding NV, trades at about 15 times expected earnings for the next 12 months, well below a peak of 24 hit in early 2021.

“It’s hard to be patient when there’s been so much carnage. But the pain should end, possibly soon,” said Jordan Stuart, client portfolio manager at Federated Hermes. “Our recommendation is growth investors need to be ready.”

Last week, Jefferies strategists turned bullish on the information-technology sector, saying in a note that a “dash for cash” by investors discounting extreme interest-rate scenarios “has been more than reflected in the compression of market multiples.”

Wells Fargo Securities said it is pausing its negative view on growth names since bearish sentiment hit a near-term extreme. Indeed, the number of companies trading above their 200-day moving average has hit rock-bottom levels last seen in the first part of 2020, while Bank of America Corp.’s popular gauge of investor sentiment is in what it called “unambiguous contrarian buy territory.”

For Kevin Mahn, who runs Hennion & Walsh Asset Management, cash-rich Apple and Microsoft will recover losses over time as “most of the damage is done” and some good opportunities are being created in tech.

He is cautious on the timing of a rebound, however, as the market hasn’t yet shown signs of capitulation. “I’m certainly not going to call a bottom, and I’m sure there will be further bouts of selling ahead,” he said.

Like Mahn, many investors are torn between prices that now look more attractive and the reality that the outlook for the global economy remains highly uncertain.

“Markets are getting used to the fact that the very driver, which drove this fantastic investment environment for the last 10 years, is not going to be there any more,” Maria Elena Lagomasino, chief executive officer of WE Family Offices, said in an interview on Bloomberg TV. Without favorable conditions, such as low inflation and rates, “the market is now trying to figure out what the new paradigm is going to look like.”

In terms of market positioning, there has been an exodus already. A recent BofA survey showed fund managers are “very short” tech, with allocation to the sector at its lowest since August 2006.

The options market is also pointing to a potential rally. Options on the $157 billion Invesco QQQ Trust Series 1 ETF tracking the Nasdaq 100 Index show a put-to-call ratio based on open contracts that recently hit the lowest level in two years. Outstanding calls have surged to the highest since 2008. A drop in the put-call ratio is usually a bullish sign that investors are preparing for a move upward.

There’s support from abroad, also. Chinese internet stocks emerged as an unexpected bright spot in another turbulent week for tech, thanks to repeated pledges from Beijing to prop up the beaten-down group and a reduction in the interest rate on long-term loans. That helped fuel a 4.7% rise in an index of 81 US-listed Chinese stocks last week.

The Nasdaq Golden Dragon China Index, which historically has been positively correlated with the Nasdaq 100, is once again testing its 50-day moving average, a key technical hurdle it has failed to consistently rise above this year. This time may be different after the index outperformed the Nasdaq 100 last week, and the benchmark has remained above its low hit in March, a positive technical signal.

Of course, that has to be taken with a grain of salt given the recent disappointing economic data, Tencent Holdings Ltd.’s weaker-than-expected earnings and the persistence of China’s Covid Zero strategy. Yet, speculation of more economic stimulus from Beijing is building.

“Investors are betting on China turning toward greater growth focus as it just saw one of its worst growth numbers last quarter,” said Jason Hsu, chief investment officer for Rayliant Global Advisors Ltd. “Everyone has been waiting for that big stimulus package from Beijing. It is not an ‘if’ but a ‘when.’”